‘I know from my own experience that a man’s life-work is nothing but a long journey to find again, by all the detours of art, the two or three powerful images upon which his whole being opened for the first time.’
Albert Camus (1913-1960) 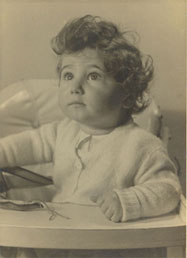 David in 1946
Photograph by Leo Kruks

David Cheepen was born in 1946. An introverted and impressionable only child, he grew up in the outer suburbs of north-west London, where a maze of quiet streets and parks, overlooked by low hills, provided him with an infinite wonderland worthy of thorough exploration.

As a boy, he became aware that, for him, certain locations exuded their own special atmospheres or ‘spirits of place’. At such spots – hill-tops, airfields, deserted railway stations, for example – he would frequently experience moments of serene detachment and heightened awareness. Time seemed to stand suspended and commonplace objects appeared to acquire mysterious significance. Such ‘epiphanies’, David feels, were the seeds of his later work as an artist….. and of his future spiritual development. They established, too, his life-long fondness for ‘vast spaces and special places’.

From the age of five years, David produced from memory, a stream of intricate pencil drawings inspired by his suburban wanderings. Broad panoramic ‘roof-scapes’ appeared, punctuated by specific landmarks, above which low-flying aircraft traced their various paths.

In the early 1960s, David recognised the essential flavour of his youthful ‘peak experiences’ in the spacious and numinous symphonies of Anton Bruckner (1824-1896). He detected it, too, in the paintings of the German Romantic, Caspar David Friedrich (1774-1840) and the Italian ‘proto-surrealist’ Georgio de Chirico (1888-1978), whose example inspired him to begin painting in earnest. Later influences included the early Renaissance masters Jan van Eyck (1390-1441) and Piero Della Francesca (1415-1492).

A self-taught artist, David slowly developed his own method of combining precise draughtsmanship with meticulously applied acrylic paint, so as to produce ordered, often symmetrical, compositions. Clearly delineated elements derived from the external world, from memory and from imagination, would be juxtaposed, resulting in images redolent of stillness, expectation and mystery. 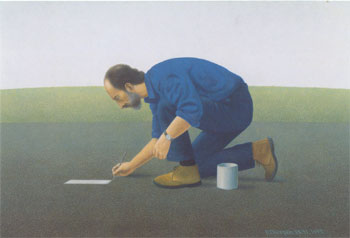 The subject matter or content of David’s work has always reflected his various and successive extra-painterly pre-occupations. In it, he has addressed social, ethical and ecological issues and the nature of consciousness and perception, while charting the ups and downs of his personal life. For many years, his approach could be described as primarily ‘conceptual’ in that ‘the idea preceded the image’.

In the 1970’s, while living in Hertfordshire, David’s paintings expressed his concern for the fate of the planet and his love of animals, especially cats. In the early 1980s, ‘earth mysteries’ claimed his interest, recollecting the intensity of his childhood responses to the landscape. Later, into the 1990s, both explicit and implicit religious symbols appeared, following a series of visionary experiences and auspicious encounters. 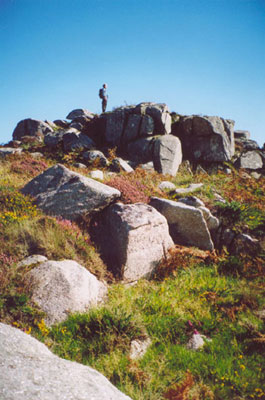 When David moved to Penwith, West Cornwall, in 2002, he was immediately and inevitably drawn to the interior – the high hills, expansive moors and enigmatic stone antiquities. In this environment, especially on calm, clear days, (rare in the ‘wild west’) he has been privileged to experience an overwhelming sense of timelessness, peace and sanctity, similar to that which graced the ‘magic moments’ of his suburban childhood. As a result, David was moved to embark, consciously, for the first time, on a thematically linked series of paintings focussing on aspects of the West Cornwall landscape, in which such sensations could be encapsulated and shared with others.

Since 1967, David Cheepen’s work has been shown in over eighty mixed, group, and one-man exhibitions in Great Britain, Norway, Germany, Italy and U.S.A. From 1975 he has been a regular exhibitor at London’s Portal Gallery (Britain’s pre-eminent showcase for self-taught, ‘naïve’ and ‘idiosyncratic’ artists), where he has held eight solo shows. He has also undertaken many private commissions.

Over four hundred of David’s paintings, drawings and prints are now in private collections in many countries. His work has been reviewed and reproduced in numerous newspapers, magazines and books, and has been featured on BBC television. Paintings by David Cheepen have also appeared in the form of posters, postcards and greetings cards.

As well as having devoted himself to his painting, David has worked as an architectural draughtsman, a civil servant and a local government clerk. He studied Education at Hertfordshire University in the 1970s where he graduated with First Class Honours in 1979. He then went on to teach Art, part-time, at Watford Grammar School for Boys until 2002.

Since 1980, David has conducted many adult art classes and has given illustrated lectures about his own work to schools and art societies in Hertfordshire – and more recently, in Cornwall.

David retired from painting and exhibiting in 2010 following a period of domestic upheaval and health problems. He continued to derive great joy and healing from long exploratory walks in West Cornwall until September 2015, when a fractured femur following a fall, curtailed such activities.
‘All things must pass’